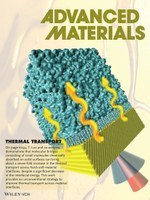 In nanomaterials where surface-to-volume ratios are orders of magnitude lager then their macroscale counterparts, interfaces can dominate material properties. This also holds true for thermal transport. It is not difficult to understand that a stronger contact would offer better interfacial thermal transport. At the molecular level, this means stronger interatomic bonds at the contact can enable more efficient thermal energy transmission across the interface. This conventional wisdom has long been followed to improve thermal conductance of material interfaces.

In a recent paper published on Advanced Materials (http://onlinelibrary.wiley.com/doi/10.1002/adma.201400954/abstract), highlighted with as a Frontispiece in issue 35 of Advanced Materials in 2014, an inter-disciplinary team led by Tengfei Luo, assistant professor of aerospace and mechanical engineering, discovered an counter-intuitive enhancement of thermal transport across a hard-soft material interface even though the interfacial bonding energy is significantly weakened. By coating the hard material (gold in this study) with small molecules that can chemically self-assemble on the hard surface to form a dense layer, the surface vibrational (heat carrier) spectrum of the hard material can be altered. If the altered vibrational spectrum matches that of the soft material, heat transfer across the interface can be facilitated by resonant-like vibration coupling which is very efficient. To realize such vibration matching, the research team used a kind of self-assembled molecule (alkanethiols in this study) that has similar chemical composition to the soft materials (polyethylene in this study). By doing this, although the interface energy is found to decrease, the thermal conductance was enhanced by as much as 7 folds. The enhancement factors achieved using the more conventional method – enhancing interface energy – are mainly below 3. The new finding was observed experimentally by Mr. Fangyuan Sun through femtosecond laser measurements and successfully explained by Mr. Teng Zhang using molecular dynamics simulations. They are co-first authors of this paper.

This study opens up a new strategy to tune the thermal transport across material interfaces. Such a strategy is not limited to hard-soft interfaces but can be generalized to any material combinations. The new strategy and the conventional wisdom is not mutually exclusive but can be combined to achieve even further manipulate nanoscale heat transfer, which is playing critical roles in thermal management of electronics, renewable energy conversion and nanoparticle-assisted hyperthermia therapeutics.