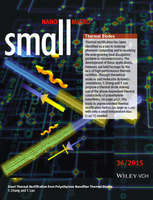 The unparalleled development of information technologies originates from the inventions of several critical electronic devices which can manipulate electron flow, exemplified by the solid-state electronic diode. While electronics dominate today’s information technologies, their counterparts – phononics, which also have the potential to transmit and process signals, have not yet been realized in applications. Instead of controlling electron flow, phononic devices control thermal energy (heat) flow, which is much more abundant than electrical energy. Over 90% of the world energy production is related to heat flow with only around 13% converted into useful electricity and even less used for electronics. Due to the abundance of thermal energy, the realization of phononics may result in even more wealthy applications than electronics. A new study from Prof. Luo's group has identified a high performance thermal diode based on polymer fibers, which may ultimately lead to the realization of phononic computers.

In a recent paper published on Small (http://onlinelibrary.wiley.com/doi/10.1002/smll.201501127/full), highlighted as a Frontispiece in issue 36 of 2015, Teng Zhang and Tengfei Luo proposed a thermal diode with unprecedented rectification factor. The diode is made of polymer nanofibers and achieves high rectification factors by leveraging the phase transition-enabled large thermal conductivity change. The proposed polymeric thermal diode not only achieves large rectification factor, but also only needs a very small temperature bias (< 20 oC) – previous didoes need hundreds of degrees for operation.

This theoretical research may open up a new direction for thermal rectification research and provide important guidance to achieve practically usable thermal diodes based on inexpensive and easily processible polymer fibers, based on which thermal circuits can be built to ultimately enable phononic computing. Besides phononic computing, thermal diodes also have applications in sensors, energy storage and generation, and electronics thermal management.